Combatting loneliness in the elderly 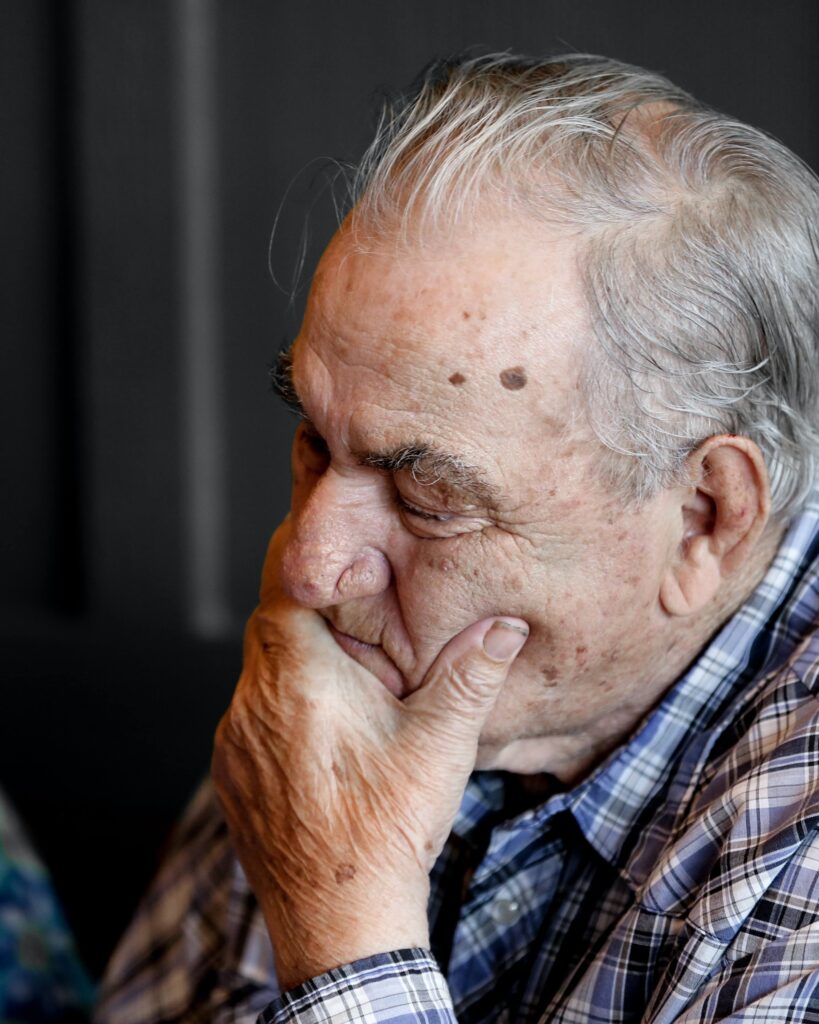 Earlier this week I was watching a programme on the TV about how Paramedics and the wider NHS reacted to the COVID-19 pandemic and the huge (no really, it was monstrous) jump in workload they faced. We spent time with some of the 1000 new NHS call handlers who were training to support the public and with the paramedics battling with their want to help people in need along with their amazing sense of duty against their own fears for their own safety and that of their loved ones.

The cameras followed a paramedic crew attending to an elderly lady called Betty who was experiencing leg pain and needed assistance. The guys went about their job like the pros they are, asking the questions, getting a feeling for what’s going on and how discussing moving forwards. . The mood was fairly relaxed and everything pretty routine. But then Betty said something that instantly changed the atmosphere in the room, not just for the paramedics but for us watching at home.

‘It’s just the loneliness that gets to me, I just don’t want to be here at the moment, I’d be quite happy to go now because I’ve had enough’

She said this in the most matter-of-fact tone and a deadpan expression that made it clear that she wasn’t being flippant or joking. She really meant it. What’s more, whilst it was clear that Betty’s knee was causing her pain, it was also clear that the call to 999 wasn’t completely about the pain, it was so she could have some kind of social interaction with somebody. Anybody

The paramedics did their best to comfort Betty but as they receive little to no training on supporting people with mental health challenges their well-intentioned words had no impact and you could see the desperation in their eyes; wanting so much to help but not knowing what to say. They left her with some encouraging words and left to attend what I imagine was a whole list of waiting jobs.

This was enough to break the heart of even the most frosty person.

It throws up a couple of interesting issues.

Firstly, many people just don’t know what to say when it comes to mental health issues. The subject seems scary, they’re worried about saying the wrong thing and they just don’t understand what the person is really saying.

Was Betty really just saying ‘I’m going to end my life’? Was she saying ‘I just don’t really care if I died’? or was she just saying ‘I REALLY could use someone to spend some time with me’?.

The honest answer is we don’t know what she really meant when she said ‘I don’t want to be here at the moment’ and we’re not meant to know, that isn’t our job. But one thing was very clear, whatever the actual meaning behind her words, she REALLY did need someone to just spend some time with her and give her some company.

This blog post isn’t about supporting the elderly with their mental health, to be honest, the way we do this is largely the same as we would support anyone else with their mental health and it’s something I’ve discussed at length. This post is about helping the elderly with loneliness. According to ‘Age In the UK‘ there are 1.4 million chronically lonely older people in England and with the Coronavirus pandemic in full swing, I expect that number to be considerably higher. Loneliness is such a horrific thing in its own right but we also need to look at preventing all of the knock-on effects such as depression, substance abuse and poor physical health.

So how can we do that? Because let’s face it, just saying ?cheer up, if you ever need anything you can call on me? might be well-meaning but it’s pretty useless and in some cases may end up with a slipper thrown in your direction. Largely because that person is probably already trying to talk to you but finds it difficult to actually say the words ‘please help me!’.

This might sound a little basic, so why do so many of us find it so hard to just shut up and really listen to a person? We spend the majority of conversations either speaking to someone or thinking about what to say next rather than just listening to them.

We do this so much that we often completely fail to grasp what it is they’re trying to tell us.

As one of the greatest thinkers and (in my opinion) one of the founding fathers of modern personal development Stephen Covey said “Seek first to understand, before being understood”. In other words but your own wants and needs to one side for a minute and really try to understand their story, background, their wants, needs and concerns.

Is a person really ‘alright’ or do they just not want to burden you with that thing that’s causing them a whole heap of stress?

Do they really want ‘a quick coffee’ or are they really asking you to give them some desperately needed company?

It’s often in these conversations that it becomes much clearer to us how we can help, because rather than assuming what’s best for them to do they will often tell you, or at the very least make it much clearer. But sometimes it doesn’t need a ?thing? they need to do, sometimes the chat alone is enough to have massive benefit.

If you’re speaking with an elderly person speak clearly, pausing between sentences to give them time to digest. If they have just finished speaking don’t just rush into say your part, maybe wait a few seconds before speaking or even ask them to tell you a bit more about it.

Again, so basic, and yet so few of us actually do it.

This can be as basic as just picking up the phone or knocking on a person’s door to see how they’re doing and if they wanted a catch up (if possible give them a heads up and agree on a time before doing this). If this feels a little daunting, then there are loads of different organisations out there who will facilitate this:

Reaching out to someone can be such an incredibly powerful thing because it showed them that they’re not alone, they are visible and people care about them. It’s so much more than ‘call me if you need me’ because it’s ‘I’ll call you to see if you need me’. It’s a small step but has a massive impact.

I cannot overstate the power of a solid chat with someone when they’re struggling with loneliness. It can literally save lives with nothing more than ‘How are you doing?’ Or ‘What’s on your mind?’. That being said, sometimes the support may have to go a little further than that, and that’s OK. So, it’s worth knowing who can be called on to provide that support.

Here’s the the thing with people contacting organisations for support though, it often feels scary and maybe like they’re not quite there yet. That’s why it’s often a good idea to explore these options with the person, find out which one feels right or address any concerns they may have. Often just giving someone a contact number isn’t enough, they need to be able to feel personally invested and take ownership of that decision rather than feel pressured or pushed into it.

Here are some different organisations that may be able to help:

AgeUK
AgeUK are one of the leading charities for older people. Helping with a whole raft of things from health & wellbeing, finances, work, learning and care.
You can visit their website or call the advice line on?0800 055 6112.

Reengage
Reengage exist solely to combat loneliness in the elderly. They have a network of volunteers
who give up their time to spend with older folks and have that vital social interaction. Their website is the best starting point, but you can also call them on 0800 716543.

MHA
MHA is a charity care provider and supports older people through care homes, retirement living, assisted shopping and befriending services. Their website is the best port of call, alternatively, you can contact them on 01330 296200.

These are just a small handful of a large number of organisations out there which dedicate their time, money & resources to helping the elderly, especially when it comes to combatting loneliness. If speaking to someone about contacting one of these services it would be best to explore the options with them and see what sits well with them.

This one is so basic I almost didn’t include it, but then again, it’s also one of the most important and easy-to-do things on the list.

It’s as simple as this. Just be kind to people. Hold doors open, say hi and ask how they’re doing, offer to help if they’re struggling in the supermarket or carrying bags, offer to pay for their coffee. Even if they say no, you’ve reminded them that there are people out there who care and they are visible. This one small act may encourage them to pick up the phone to a friend, family member or one of the charities discussed above. We don’t get to see what happens behind closed doors or inside people’s minds.

One small act that we just throw away as one of the many brief encounters we have every day could mean the world to a person who is struggling with loneliness, dark thoughts or feeling invisible to the world.

Look, the world is a tough place, especially right now and while many people are finding making it through each day hard, the biggest at-risk demographic is our elderly. But they’re also our most cherished asset in society today. They have seen, done and experienced things that many of us couldn’t imagine. They have a literal lifetimes worth of knowledge and life lessons and are often only too happy to share these with us.

Offering a friendly ear, a helping hand or some advice isn’t just a one-way street. It doesn’t just help the receiving person, it helps the giver too because it makes us feel good to feel needed and useful. Most of us like it when someone asks our advice, opinion or just comes to us for a chat. So you’re not only helping someone else (and potentially saving lives in the process), you’re helping yourself.?

If you would like to learn more about how I work with organisations to create, implement and maintain workplace wellbeing drop me an email at?Pete@PeteWhiteConsulting.co.uk